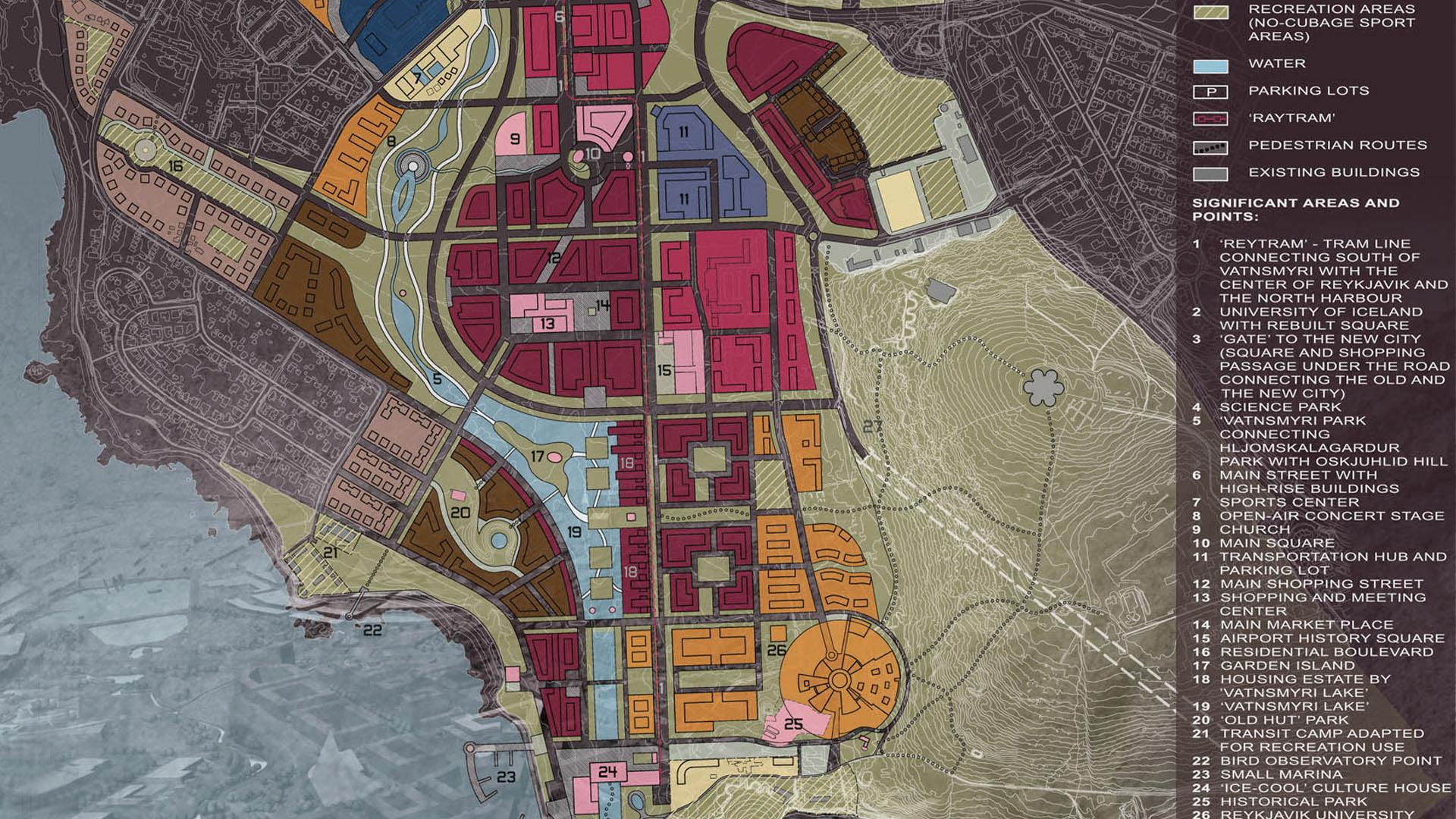 REWITALIZACJA DZIELNICY VATNSMÝRI W REYKJAVÍKU - OPIS PROJEKTU Z PRACY KONKURSOWEJ
IDEA
Vatnsmýri is to become the new city center for Reykjavík, living up to the
expectations of the 21 century, where intense urban development interweaves with
nature represented by green areas and water. The multi-functional urban area, with
strongly represented educational and research elements, includes a mix of
residential features with services, culture and entertainment. The concept of the city
is aimed at keeping Vatnsmýri alive from the morning until late at night, inviting
Reykjavík citizens to participate in events and entertainment offered by the center
and enjoy the shelter offered by development and vegetation.

THE RUNWAY FROM NORTH TO SOUTH
The urban pattern of Vatnsmýri remains focused on the North/South axis marked by
the runway of the present airport, which has been incorporated into the city structure.
Along this axis, the predominant presence of particular functions supplementing the
residential function changes, starting from education and offices in the north, through
services, stores, cafes and restaurants as we go southwards.
Continuing south from the present airport buildings, the dense development of the
strict center becomes more relaxed, making way for more green areas, culture and
recreation. The residential buildings become more exclusive.
The south end of the line based on the present runway is marked with a strong
accent - a building housing a cultural and recreational center, with an adjacent
small marina on the west.
This core area is neighbored by districts with supplementary functions, favoring
leisure in natural environment, business, and housing.
In order to protect the city center from cold winds, numerous sheltered squares and
passageways are designed to attract pedestrians to public spaces which remain cozy
regardless of the weather.

TAKE A LOOK AROUND
The Pearl (Perlan) and the Halsgríms church remain visible from many areas of the
city. This is possible thanks to the visual axis continuing to Halsgrímskirka from the
southeast and the altitude of the buildings, which, apart from the few tall buildings in
the strict city, does not exceed 6 storeys.

SCIENCE AND TECHNOLOGY
The planning idea for Vatnsmýri takes into account the development needs of both
the University of Iceland, in the northeast part of Vatnsmýri, and the Reykjavík
University in the southwest of Vatnsmýri. The ease of communication between
the two campuses and from each of the campuses to the center is ensured by a tram
service, footpaths and cycling roads.
Serving Iceland’s intention to construe its economical growth based on science and
high-tech business, the northern part of Vatnsmýri, east of the University of Iceland,
will accommodate business and science park and office buildings intended mainly
for high-tech companies. Science and technology are also represented in Vatnsmýri
by the clear concept of the city center, the technically shaped artificial lake in the
south, and the modern communication and transportation with limited use of personal
cars in the center.

NATURE WITHIN THE CITY
The nature in Vatnsmýri is represented mainly by areas with vegetation and by lakes
and ponds, both natural and man shaped.
The ‘green lava’ pours down from the Öskjuhlíð hill into the city, continuing in the
form of parks as well as elements of city squares and vegetation surrounding ponds.
The green areas are supposed to give a sense of continuity between the old city
center of Reykjavík and Vatnsmýri through the Hljómskálagardur Park, the Nordic
House area and the bird sanctuary.
The nature of water present in the city changes starting from naturally-shaped
reservoirs including the Lake and the ponds within the Bird Sanctuary, through the
artificial stream flowing southwards and entering into the city center, to the
regularly-shaped Vatnsmýri Lake with a recreational activities function and the
canal pointing towards the culture and recreational center in the south.
In order for people to use the green areas spreading throughout Vatnsmýri,
numerous recreational areas are planned in various parts of the city, which might be
used for team sports, jogging or cycling. These are predominantly present in the
southeast part of Vatnsmýri, but also near the University of Iceland.

GETTING AROUND – COMMUNICATION AND TRANSPORTATION
The communication between Vatnsmýri and other parts of Reykjavík is ensured by a
remodelled and extended Njarðagata street, which serves as an orbital road circling
the main city center.
Going from north to south, the street continues along the green areas, turning west
just above the newly shaped artificial lake and connecting to the tunnel road
under the Öskjuhlíð hill. A grid of parallel streets and avenues for easy
communication between various quarters of Vatnsmýri connects to the ring road.
This pattern is broken only by one street, from the south eastern shore towards
Halsgríms church in the north, making the church a visible landmark of the city. This
new network is fully interconnected and constitutes an extension of the present
streets in Reykjavík.
Communication between north and south part of Vatnsmýri will be based on a new
tram line, running from the Reykjavík Harbour in the north to the Reykjavík
University in the south. The tram will provide an alternative for personal car
communication and make the city center easily accessible for visitors.
So called ‘Gate’ to the new city that is a shopping passage under Hringbraut
Street is a crucial element connecting Vatnsmýri with the north part of the city.
A transportation hub and a new bus station just north of the existing airport
buildings will connect the city center and university grounds to other towns and the
countryside. A buffer parking lot for will be located near the hub, serving also the
visitors to Vatnsmýri.
The walking and cycling paths stretch throughout Vatnsmýri, primarily near the green
areas, from the present city center and Öskjuhlíð hill on the one hand and the
southeast bank on the other. Within the city center, near new market, pedestrian
zones with limited traffic are intended to increase the attractiveness of the stores,
cafes and restaurants situated in this area.